The exhibition project The rule of two walls brings the result of two months of work by our current residentsNastya Didenko and Valeriia Mirhorodchenko. The exhibition brings together projects that are different in terms of media, but ideologically very similar, in which the authors intensively deal with the topic of the war in their native Ukraine.

The Nastya Didenko project is a diary of the war in Ukraine.

Through the personal experience of living under explosions and the sound of sirens, reading reports about the atrocities of the occupiers, artists are born with the desire to respond to the events around them. During bombing, the safest part of the building is considered to be a space in which there are at least two walls without windows between a person and the street. This is called the “two wall rule”. Nastya’s paintings mainly illustrate the image of “home”, linearly represented buildings on an abstract landscape background, which at the same time resemble the “ghosts” of buildings that no longer exist or children’s drawings. Probably, each of us once drew a house made of several lines. A square, a triangular roof, a window, a flat, perspectiveless shape that is recognizable to everyone. Now this image has transformed. For many Ukrainians, since their homes have been turned into death traps or lost forever, this perception is terrifying. Nastya depicts the silhouettes of houses and leaves them somewhat naive, because no visual means can convey the true unforgiving reality. The creation of works appears in the form of a diary, the purpose of which is not only to convey facts about events, but also self-reflection and self-therapy, since it is impossible to stay alone with these experiences and processes. Nastya also creates objects-buildings perceived as living beings, the bodily range of colors is a reference to the human body – although the houses have retained their monolithic form, they are wounded and bleeding. Wounds that remain even after victory and will never heal, just like the thousands of lives lost.

Valeriia Mirhorodchenko’s project “Hell of the first month of the war” represents her projection and sublimation of emotional and physical states during the first months of the beginning of the war. Because war is aggression, aggression is action, and the act of aggression leads to destruction, injury, death, and pain, after which deep wounds become painful scars all over the body and heart. The devouring hell of the war took away their sky and brought a horde of devils to the Ukrainian land, who like locusts devoured a piece of their land and with it their childhood, youth and life. At the same time, everyone has lost not only something personal, but also something social, and the heart is not enough to survive this sadness and all these emotions – sadness, despair, hatred, pain, compassion, helplessness, fear.

Valeriia works on this theme by combining photo collage and woven tapestry. In a tapestry, full of bright colors, she processed the scene of only one of many terrifying war situations. She worked on it for several months and, in her own way, created a personal diary of reflections and thoughts on the topic of war, where each new thread is a written word. In the photo collage, she works in the opposite way, namely by condensing and cumulating many fleeting personal stories that took place against the background of this great war.

In the lecture Stolen by Moscovia, Nastya Didenko, using the example of artists of the last centuries, will introduce us to the art, personalities and stories that were appropriated by Russia from Ukraine (stolen).

Nastya Didenko (*1994) is a Ukrainian artist living and working in Kyiv. In her artistic practice, she deals with the topics of the position of artists in society, re-evaluation of post-Soviet traumas and precariousness. She expresses these theses through the medium of painting, installation and photography. 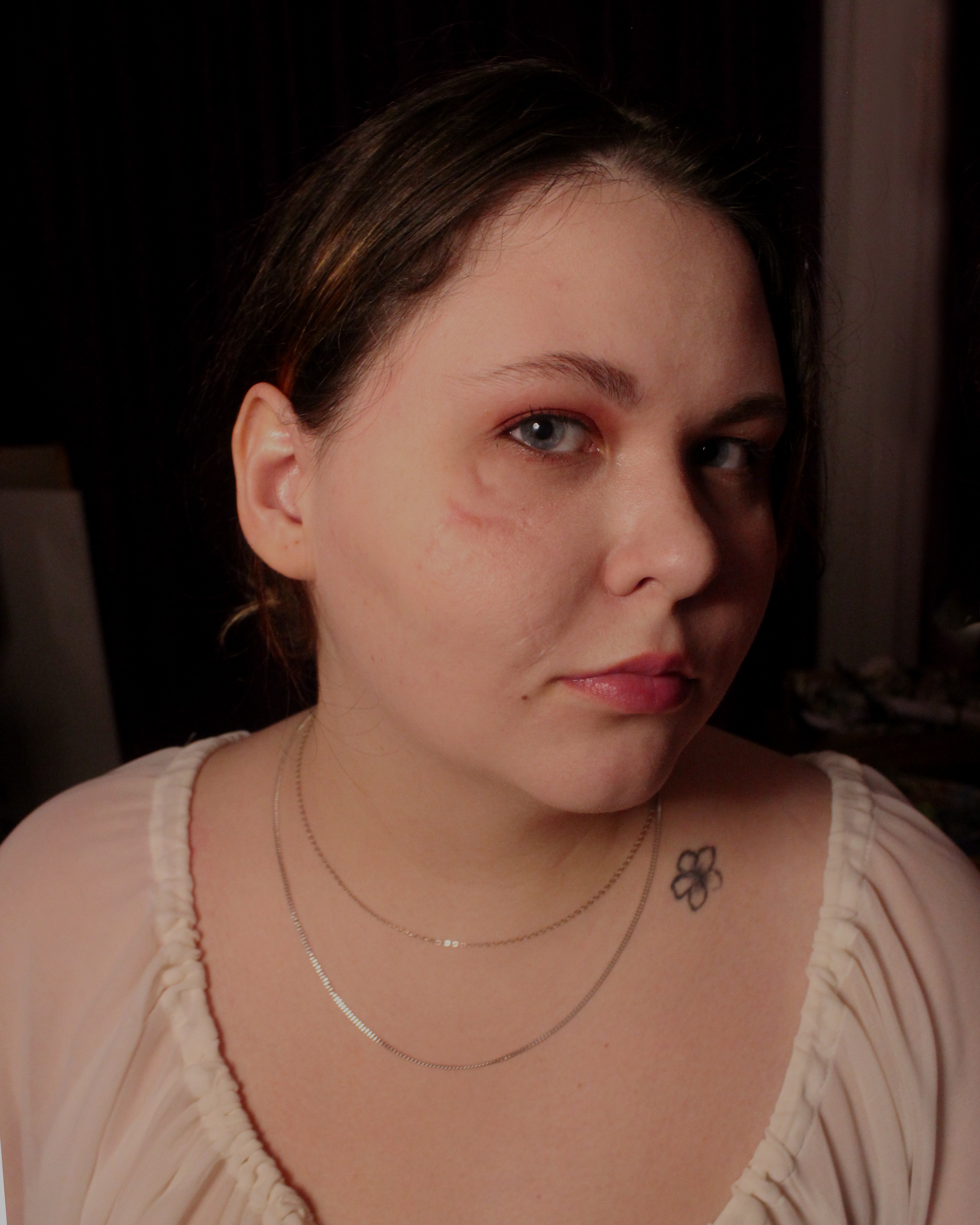 Valeriia Mirhorodchenko (UA) is a visual artist from Mykolaiv. In her work, she focuses on the physicality and reflection of inner experiences and their multifaceted nature. She combines different types of media, from media formats to decorative arts. Valeria studied at the “Mykolaiv college of culture and art” at the faculty of arts and crafts (2014-2018). In 2020 she decided to try another field of art – photography – at the MYPH school of the Ukrainian concept photographer S. Melnichenko.